Playing in the snow

On President’s Day 2019 I finally got to play in the snow. It was sunny, my son was at school, I had the day off, it wasn’t negative degrees, it wasn’t snowing horizontally, and Gjalla was healed-enough to play with me. It was wonderful.

I spent maybe an hour shoveling. It didn’t take that long because there was that much snow, it took that long because I am not the best at shoveling efficiently. I’m sure people that have lived in the Midwest for awhile have a specific strategy for shoveling their driveways and can get it done quickly.
But my strategy wavers between “chase the dog with the shovel” and “get a good workout”.

Chris came outside at one point to help me but I don’t know if he was looking for a break or looking to save his wife from all the shoveling. Maybe a little bit of both.

His help was welcome but it’s not like I really needed help – I wasn’t overwhelmed with the snow or getting sick of shoveling. I was enjoying the shoveling, which I know sounds weird, but snow is still a novelty to me. I was grateful for the help and as soon as the driveway was done, I started shoveling the lawn.

What I did was use the shovel to create a path through the grass from the driveway to the front door. That way if the driveway ever becomes super icy again we have an alternate walkway to get to the front door. I also paved a way from the middle of our driveway past the lamp post to the foot of our driveway. My goal was to reach the giant pile of snow there because what better place to build a snowman (or snow animal, in my case).

I spent about an hour trying to sculpt the giant mound of snow at the foot of our driveway into a dog. I didn’t fail to have fun or to laugh at my own whimsy, but I failed miserably in making a snow dog. My creation resembled a snow pig, no matter how much I tried to fix the legs or ears or snout.

I guess I shouldn’t be surprised, I have a muscle memory of building snow pigs thanks to my little sister and her favorite stuffed animal, Piggy. I think she’d probably love my snow pig, so with that thought I was able to stop my tinkering and let the snow dog be a snow pig. 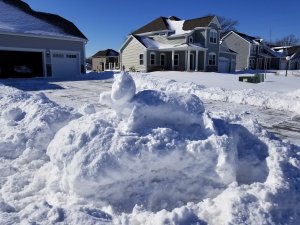 I made sure my intentions were known among my friends and neighbors on Facebook, just in case there was a risk of someone being offended or reading to much into the giant pig in my yard.

Honestly, I’m much less worried about someone getting offended than I am worried I won’t get the chance to play in the snow like this again. I might seize this opportunity before this snow turns to ice destroy the dog/pig and build something new. Maybe I’ll have better luck with a dolphin or a turtle, something a little easier to shape. Maybe I need to Google this for tips. 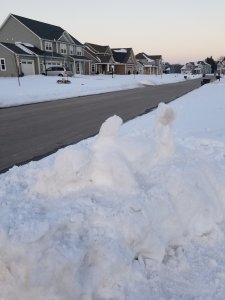 There’s so many winter activities I would like to do and haven’t done yet: I barely used the snowboard I bought last winter or my snowshoes. If this snow will stick around for awhile and if the sun is out this weekend I’m going to make a point to use my winter gear. If you don’t enjoy the snow you’ll have the same amount of snow but less fun. That’s my mentality for the rest of this season. I need to make sure I make the most of my time with the snow.