How to Adjust From a Dog Beach to a Dog Lake

Taking my dog to the beach was my all-time favorite activity while living in So Cal, so I felt like my first trip to a lake with a dog swim area would make or break my satisfaction with this big move.  The dog beach in Huntington Beach and the dog swim area at Minooka lake are dramatically different, but the adjustment was easier than I thought.

At the Dog Beach

Taking Gjalla to the dog beach was always a struggle. Have you seen those videos of people trying to drag their bulldogs for a walk while the dog lays down in protest? Yep – that’s what it’s like making Gjalla go for a walk. We lived walking distance from the beach. Gjalla would dig in and resist any forward movement until we got to a certain block where it would dawn on her we were turning right to go to the beach (and not left to go to the Poke Stop).  From that point on, she’d lead the way to the beach.

Gjalla loves the dog beach. On more than one occasion, I’ve tried coaxing her to leave the beach and failed. She’ll follow me a few steps up the sand, look at me, acknowledge that I’m saying it’s time to go home, then turn around and go back into the water. This is usually referred to as “the bulldog face” by fellow bulldog owners. Your bulldog understands what you’re saying – they’re not dumb – but they have their own agendas and they’re going to do what they want to do. I love the beach so much I almost always cave and follow her back into the water. 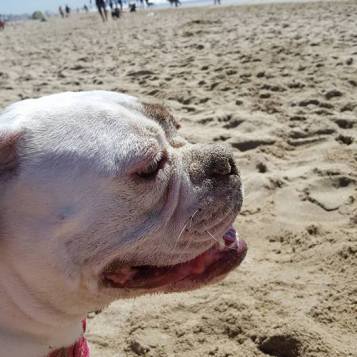 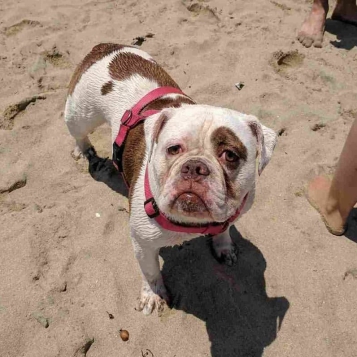 When we’re at the beach, Gjalla pretends she’s Shore Patrol. She’ll pace up and down along the shoreline, right where the waves die and recede. She’ll scope out the terrain and figure out who to play with – and it’s not dogs she looks at, it’s people. If there is a person playing fetch with their dog, Gjalla is in. She’ll run up to the person and pretend she belongs to them, then run along side that dog (for moral support) as it fetches for its owner.

Gjalla rarely goes in the water deep enough to swim. She likes wading in the water, as long as she can still touch the ground. She probably gets this from me, since I have the same strategy. We stick to the shallows because we’re afraid: for Gjalla, it’s a fear of sinking; for me, it’s a fear of sharks. 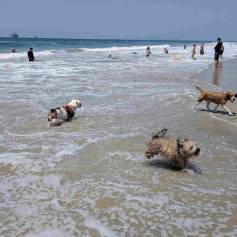 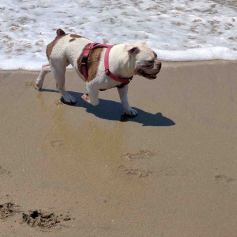 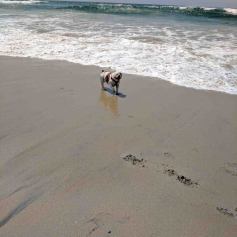 At the Dog Lake

For our first trip to the dog swim area of Minooka Lake (henceforth the “dog lake”), I did not have to deal with dragging Gjalla on a walk. The dog lake is a short drive away, and Gjalla has no problems with being driven since it doesn’t involve exercise.

When I entered the lot for Minooka park, I asked the attendant how much an annual/seasonal pass would be. It’s a body of water which means I plan on coming here a lot. He informed me it wouldn’t be worth it since the lake “closes” in October. Say what?

What if I want to see it and walk around it but not go in it? Beaches don’t close in So Cal, though there are times you’re not allowed in the water. How does that work – how does a lake “close”, exactly? It’s not like the water is going anywhere.

Gjalla loved the lake! She still played Shore Patrol at first, but since there were no waves (and no sharks) her and I were both able to go all the way in the water.  She turned out to be quite the little swimmer!

At Minooka Park, the lake doesn’t have a segratated area for dogs and people. It is all a dog+people beach. Luckily for everyone, Gjalla was well adored. It was almost like Rent-a-Bulldog since so many kids asked me if they could play fetch with her. 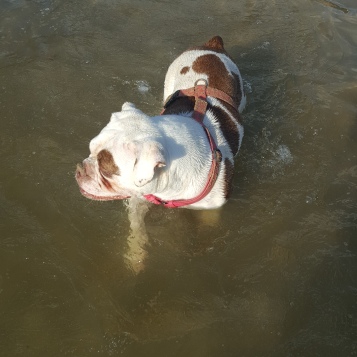 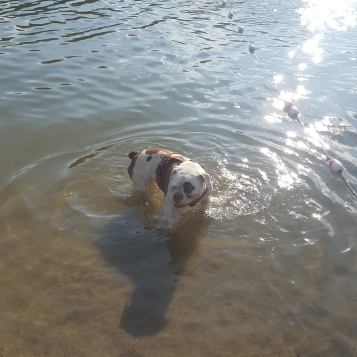 Gjalla seemed to enjoy swimming in the lake because she would swim all the way out to me and then back to shore, then come back out to me again – making giant bullgog laps. I found swimming the lake just as enjoyable and refreshing as the beach. Watching Gjalla swim made me so happy because she looked so happy.

I’d call this trip to the lake a success, and with that, a major mental hurdle to moving to Wisconsin fades away.

Confession: My bodybuilding training has slipped bc there's too much to explore in my new neighborhood. Yesterday I was having a very stressful day. Some of my family and family-in-law are going through some real tough times health-wise and I feel so powerless to help them. Once I get wound up and stressed out, the best cure is not comfort food, it's being in the water. That used to mean a trip to the Huntington Beach Dog Beach, but now it means a lake. Gjalla and I both LOVE the beach, so I was happy beyond measure when we found a lake she and I could both swim in (and look at her go!) Thank goodness Minooka Lake is only 15min away from my new house. 🤓💚🐶🏖💚🏞🐶💚🤓 @worldofbullies #worldofbullies #bulldog #bulldogs #bulldogsofinstagram #bulldogsofinsta #bulldogsofig #mybabieshavepaws #mybabieshavefur #bulldogmom #lake #dogswimming #gotwater #stress #cureforstress